Hey there, this section is part of our Core Content, which means we ask that you sign up and take our quiz before reading it (or log in if you've already created an account). But don't worry, signing up is free and easy, so what are you waiting for?!

Have you ever heard how a candy bar only cost a nickel back in the day?

First off, that sounds amazing. But unfortunately, it would be tough to find such a deal today. And as you can probably guess by now, the reason for the change in price over time is…..inflation!

Yes, it can also mean blowing up an odd-looking balloon man for stock photographs. But here we’re talking about the general increase in prices of goods and services over time.

Inflation can be caused by different things, but basically, as the supply of money (and the amount of lending) in the economy increases, the prices of goods and services will go up. Picture more dollar bills chasing after the same amount of stuff to buy. More and more dollars are competing for the stuff, so the stuff starts costing more. Stuff.

The way inflation works is actually related to compound interest. Except instead of your investment/debt balances increasing over time, it’s the prices of goods and services that are increasing.

Example: Take an every day item like a gallon of milk. Suppose it costs $4 today.

Now let’s get wild and also say the rate of inflation is 3% a year (actually, it’s not so wild, 3% inflation is a reasonable estimate based on recent history in the U.S.).

This means you would expect the price of milk to increase by 3% over the course of a year simply due to inflation. Of course the price of milk is also determined by other factors too. For example if there was a shortage of cows next year, prices would probably increase. But for right now we’re only talking about inflation.

Now you might be thinking, “Hey that increase of 12 cents doesn’t seem like that much!” And of course it isn’t all that much, but when you consider that everything else you buy will probably be increasing in price too, it’s going to add up.

Also, and even more importantly, after a few years, that annual increase of 3% will really start to look like a lot.

At this rate, the price of milk will double in about twenty three years.

Let’s say you had set aside $4 today with the intention of buying milk, and you forgot about the money for twenty three years. When you go to the store, you would only have enough money to buy half as much. Everything has doubled in price! Aside from you becoming the Rip Van Winkle of dairy purchases, this would not be good. 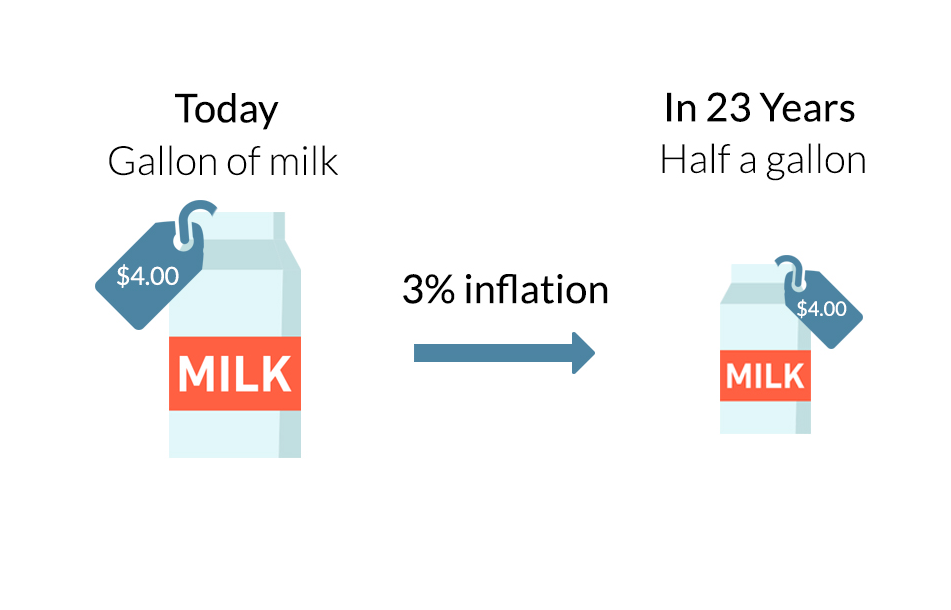 Alright, we admit that twenty three years seems like a long time to wait to buy milk, but when it comes to investing your money, it’s actually not that long.

If you start investing in your 20’s, 30’s, or even 40’s, you’ll probably be investing for much longer than twenty years.

Also, we only assumed 3% inflation, which is actually fairly mild. If inflation was 7% a year, it would only take 10 years for your money to lose half of it’s value. Even at 3% over 10 years, your money will have lost about 25% of it’s value.

Punchline: The longer the time period, or the higher the inflation rate, the bigger the impact inflation will have on your money.

Focus on your purchasing power

Since inflation changes the value of money over time, it’s important to think in terms of your purchasing power. This is a measure of what your money can actually buy, rather than focusing only on the dollar amount you see in your bank account.

Sometimes we think our savings are earning a nice return, but when we account for the negative impact of inflation, we discover they’re not actually growing quite so much (and may even be shrinking). Yes, kind of scary.

Time to get real

To track your purchasing power, you need to adjust for inflation by converting nominal numbers to real numbers.

Money that has not been adjusted for inflation is referred to as nominal. It’s what the money is worth in name only, not in value.

Money that has been adjusted for inflation is referred to as real. It’s what you can really buy, or the value. (This is one of those times in finance when the words actually mean what they sound like, which is nice.)

In the milk example, we started out with $4, which could buy a gallon of milk today. We then waited 23 years. At that point, the $4 in your pocket would still have a nominal value of $4 (you still call it $4).

However, since your $4 can only buy half a gallon, we say its real value has decreased to $2 in today’s dollars (you always need a reference point when you’re talking about real vs nominal). The $4 you have in twenty three years can only buy $2 worth of stuff today. You would say it has lost half of it’s real value due to inflation.

The same terminology applies to interest rates. Interest rates that have been adjusted for inflation are called real interest rates. And when it comes to tracking your money over time, it’s the real value that you want to pay attention to.

How to do it: To convert a nominal interest rate (which is what you would be given or told) into a real interest rate, you subtract the rate of inflation from the nominal rate.

Example: Suppose you earn a nominal return of 7% on your investments, meaning your account balance grew by 7% (not counting any new money you’ve put in). But now let’s say inflation was 3% for the year. Then your real return was only about 7% – 3% = 4%. You can really only buy 4% more stuff with your money. Still, not a bad deal, but not quite as much as you may have expected.

Side Note: This conversion from nominal to real rates is technically only an approximation (the exact math is a little different), but it works well with relatively low levels of inflation, like we tend to see in the U.S.

Over the past 30 years, inflation in the U.S. has been fairly low and stable, remaining around 2-3% per year. This isn’t terrible, but still something you need to consider for long-term planning.

However, inflation can get uglier. A lot uglier.

During the 1970’s and early 1980’s, annual inflation exceeded 10% at times. At 10% inflation, your cash would lose half of its value in just 7 years. And while 10% inflation seems pretty bad, it can actually get much worse than that even.

From 1921 to 1924, Germany experienced extreme inflation, or hyperinflation, which at one point became so bad, prices of goods doubled within days! With that level of financial instability, paper money became virtually worthless, resulting in widespread financial hardship.

Our point here isn’t to keep you up at night worrying about the inflation boogeyman, but to point out that inflation can pose a real risk to your finances and it’s something you need to pay attention to.

Find the data: If you want to look up actual inflation rates, you can check out the U.S. Consumer Price Index, or CPI, at the Bureau of Labor Statistics website.

It may sound a little strange, but inflation rates can also be negative at times. Negative inflation means the value of money is increasing with time (you can buy more with a dollar in one year than you can today). Not too surprisingly, this is called de-flation.

At first glance, it may seem like money becoming stronger over time is a good thing, but deflation can actually be a big problem. When this happens, people tend to wait to buy things, and this causes the economy to slow and can lead to an ugly downward spiral of lost jobs and declining wages.

While periods of deflation are typically less common than inflation, they do occur.

Beginning in the 1990’s, Japan experienced roughly two decades of deflation, meaning its money, the Yen, became stronger over time. And this contributed to some major and pervasive economic problems.

Just as with inflation, you should be aware of the effects of deflation because it can impact how certain investments perform and how your wealth changes over time.

Alright, so what can I do about inflation?

Over time, inflation will erode the value of your money, so you’ll want to be proactive in two important ways;

1) Pay attention to it. Don’t forget inflation is always there, and be sure to factor it into your financial plans, especially for longer term goals. In other words, think in terms of your purchasing power.

1) Inflation is the general increase in prices of goods and services over time.

2) Over time, inflation will cause your money to lose value.

3) Focus on your purchasing power, which represents what your money can actually buy.

4) Real interest rates have been adjusted for inflation. They represent the growth rate of purchasing power.

5) Over long periods of time, inflation can have a significant impact on the value of your money.

Sign up to see the rest of this article!