How 2020 Measures Up to Past Market Crashes (So Far)

Alright, before we get into the fun and exciting world of stock market crashes (…yikes), a quick disclaimer. Straight talk time.

We were a little hesitant to publish this post at first. Mainstream media has a tendency to over-hype events and stir up emotion for financial gain (shocking, we know).

But that is the exact opposite of what we stand for – calm, rational thinking and realistic long-term planning. Yes, it may seem a touch boring to the untrained eye. But it’s a proven and effective way to build wealth and reduce stress. And there’s nothing boring about effectiveness or provenness (not a word).

Long story short, if you regularly set money aside, have a thoughtful plan, and stick to it (even when things look shaky), you WILL get to where you need to be financially.

And while some of you may be dipping into your emergency funds now or in the near future, that’s exactly why you have an emergency fund. Remember, what’s happening now is not forever. We will get through this.

But we should also learn from the past

All that said, it’s also important to learn from history. By looking to and understanding the past, we can develop a better framework for putting life’s events into perspective. And while COVID-19 is presenting a unique set of challenges for us today, we’ve hit some pretty big bumps in the past too – human bumps and financial bumps.

So we’re going to turn back the the clock, look at some wild times of markets past, and see how this crash compares (so far) to those crashes of yesteryear.

And as luck would have it, here’s famed financier JP Morgan as our time travel tour guide! Say hello, JP. 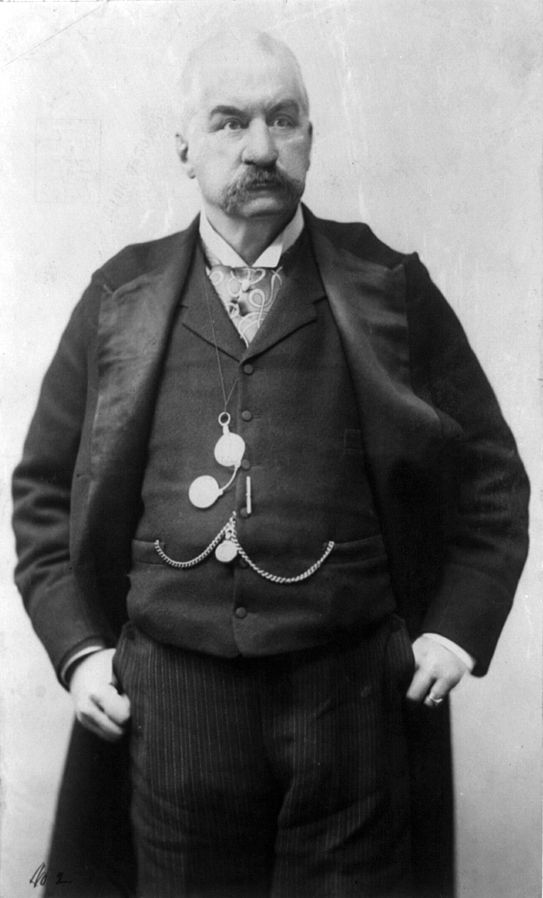 So then, just how bad can it get for stocks

Over the past century, the three worst stock market events, in chronological order, were

Of course there have been many other smaller market dips and corrections along the way. And there have been other periods of poor stock market performance, stagnant growth and all around weak economic conditions.

But these three were the worst “events” for the broad stock market. There’s no rule book that says things can’t get worse than these three, but they’re what we have to work with. So let’s take a look at each one in gruesome rubbernecking detail.

1929 and the Great Depression

By far the worst period for the stock market and the economy in the past century was the Crash of 1929 and the Great Depression. 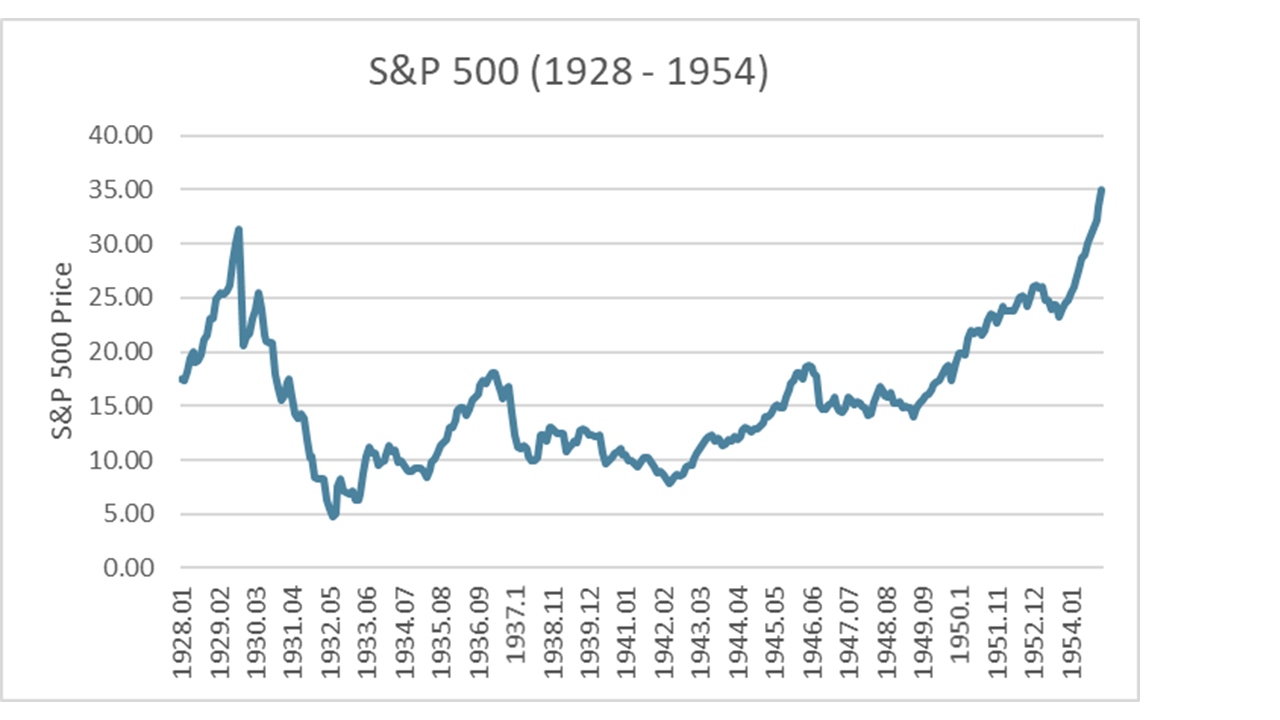 And while the market crash itself was bad, the subsequent Great Depression was worse. It was a time of widespread unemployment and economic hardship. It’s the poster child for worst case scenario (so far), and is worth learning about and appreciating. Here’s just one of the many photos you can find online. Pretty darn bleak. 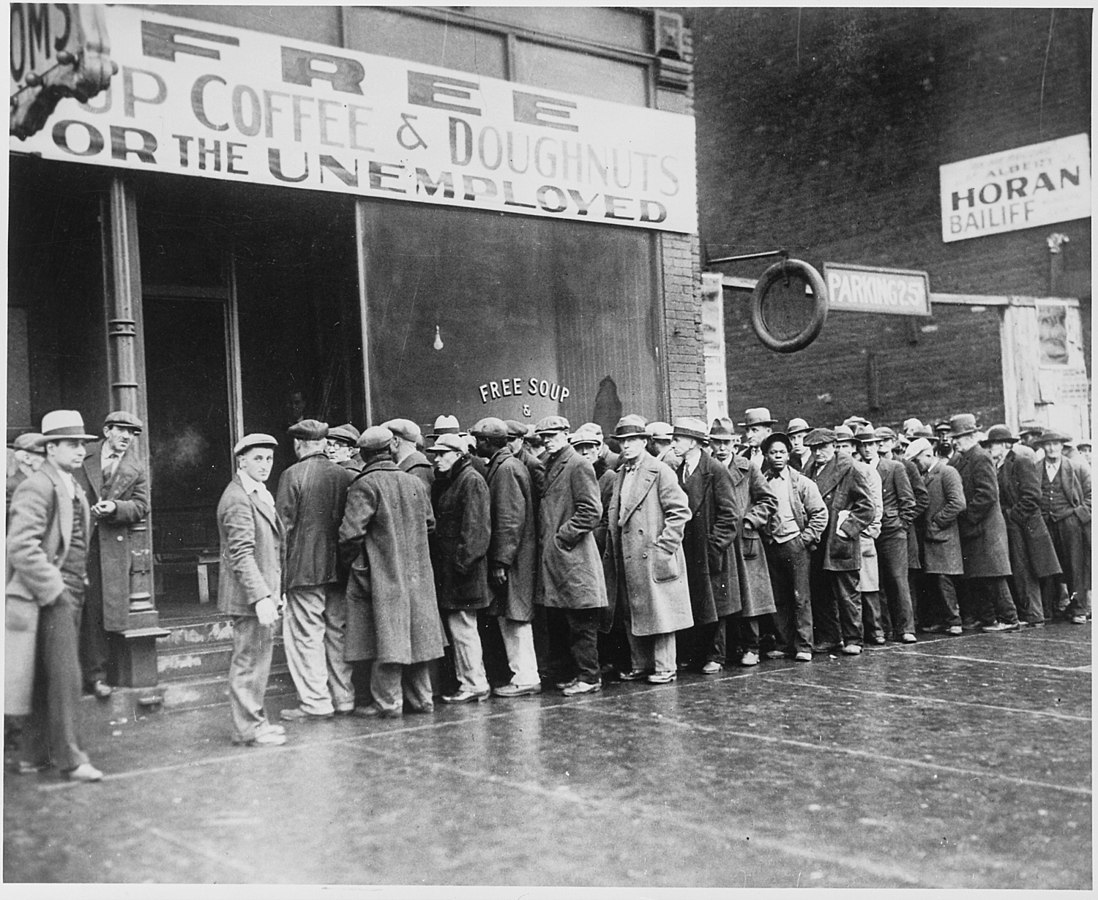 You may be thinking, “Hey, I’ve waited in a long line for soup before.” But this ain’t your fancy hipster kale soup with a kombucha chaser. No, this was gross dirty survival soup. Gluten free? You were lucky if you got an old boot lace in your bowl. (Last part not actually true, but the times were tough.)

And while it feels like an economic shock of this magnitude could never happen again, there’s really no reason why it can’t. (Not trying to keep you up at night or anything.)

Also of note, it took nearly three years from the start of the crash for stocks to reach the bottom, and there were a lot of ups and downs (mostly downs) along the way. This highlights how impossible it is to predict the bottom. In fact, in October 1929 (in the heat of the crash), the stock market rallied over 12% in a single day. So that 11% rally we had on Tuesday doesn’t necessarily mean the worst is behind us. If you were wondering.

So what eventually got us out of the Great Depression and led us to recovery? Oh, just another little event called WWII. Let’s hope it doesn’t come to that this time.

The 1990’s were a time of rapid growth and endless opportunities to get rich in the stock market (not unlike the roaring 20’s, and you just saw how that one ended).

One section of the market in particular, tech, was uniquely positioned for growth because of a magical little invention called the “internet“.

This was long before the days of mindless Facebook scrolling and aspiring social media influencers posting self-indulgent gibberish on their Instagram accounts. (By the way, have you checked out our amazing Instagram account? wink wink)

No, this was a time when brilliant new companies like Pets.com were shattering our notions of sensible business plans and reasonable stock valuations. They were going to take over the world. Change life forever.

How could this NOT be the face of a technological and cultural revolution? 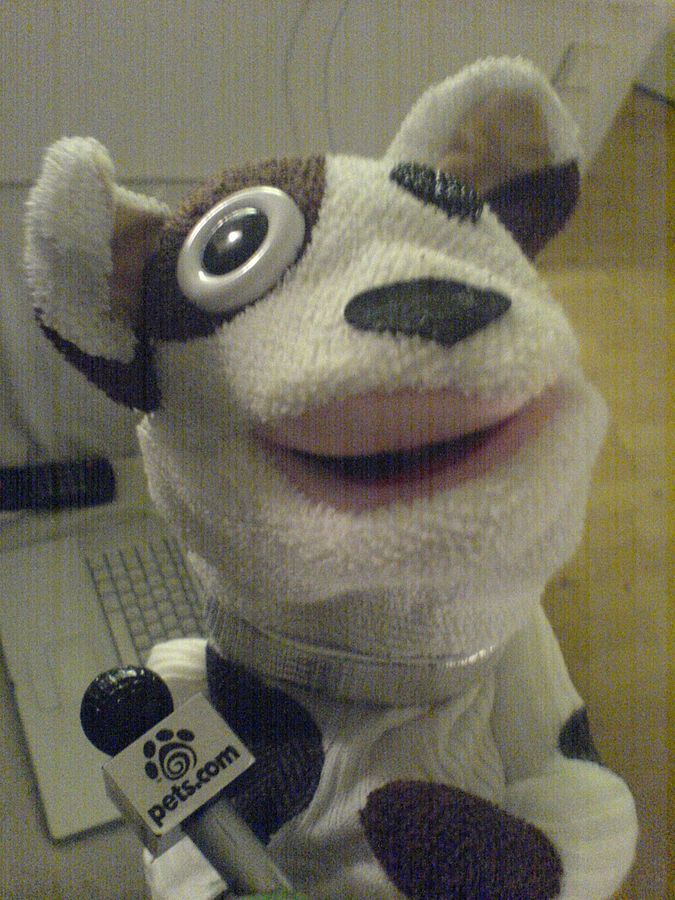 Sadly, it wasn’t meant to be.

When the bubbly euphoria over internet stocks finally soured and popped, reality came and came hard. From it’s peak in March 2000 to it’s trough in the Fall of 2002, the Nasdaq (an index comprised of technology stocks) had lost nearly 80% of it’s value. Within nine months of it’s illustrious IPO, Pets.com (sorry to be picking on you Pets.com) was out of business. And many of it’s internet pioneering friends shared similar fates.

The broader stock market fared a little better, but it still took a big hit. From it’s peak in 2000 to it’s trough in 2003, the S&P 500 lost a little over 40%. And it took a few years to get back to it’s peak value. Nothing like 1929 and the Depression, but still a serious setback for investors. How could a sock puppet cause so much trouble?

2008 and the Great Recession

Ahhh, the 2008 financial crisis. The most recent and most polarizing of the big three.

Seems like everyone has an opinion of who caused it. It was those greedy banks! No, it was all the people lying about mortgages they could never afford! Wrong again, it was the rating agencies who had no clue how to assess the risk of trillions of dollars in mortgage-backed securities! (whatever that means). The list goes on. But wherever you stand, one thing is clear. The Great Recession was a great big mess. 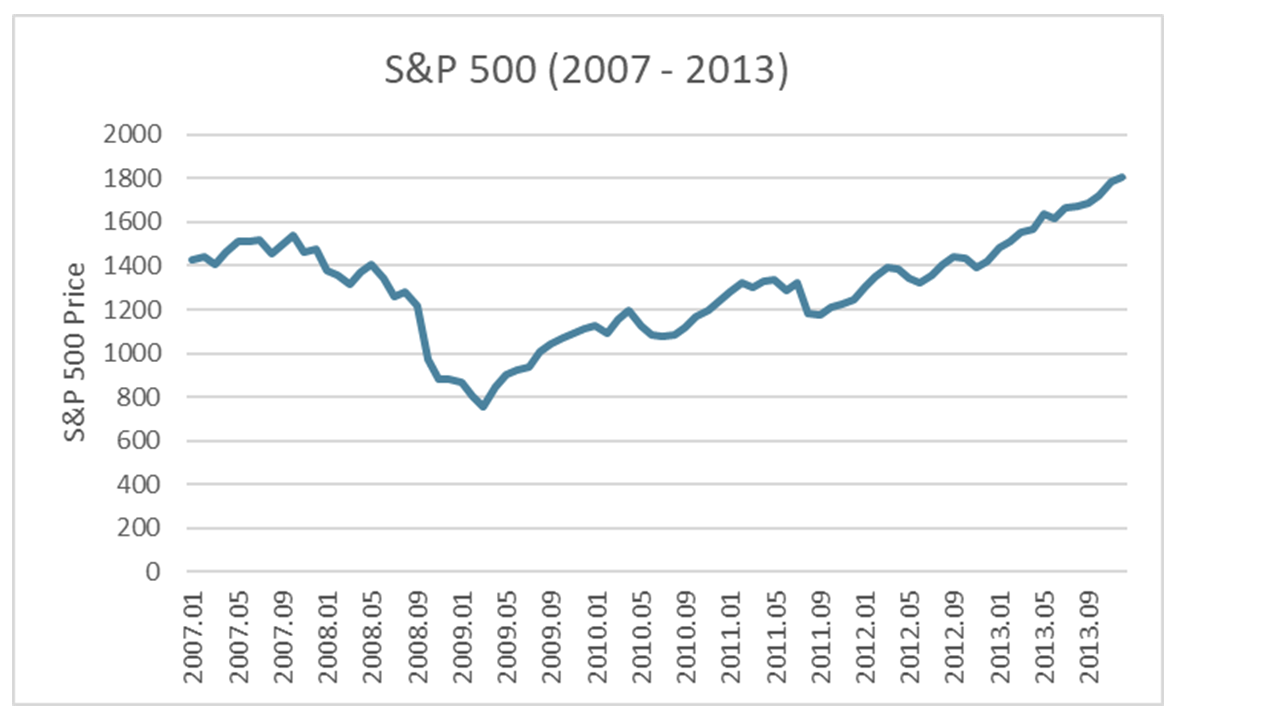 Fortunately, the aftermath was very different from 1929. Aside from the home building industry and Lehman Brothers employees, life pretty much went on as before.

No widespread unemployment, no soup lines, no WWII. And stocks reclaimed their peak within a few short years (and surged right on past).

Yes, there were repercussions of it all, but it could have been a lot worse. The government bailouts and quantitative easing from the Federal Reserve seemed to work. (Whether or not those have created a bigger problem for the future is yet to be determined). But all in all, life went on.

Here we are. It’s 2020, coronavirus is rampaging, and the stock market has swooned.

While stocks came back last week, rising about 10%, they’re still down about 25% from their peak in February. And at their lowest point, they had lost about 35% in a matter of weeks, much faster than these other three crashes. Not to mention, the economy is likely heading towards a dark place as over 3 million people filed for unemployment last week. A truly staggering amount.

While the economic relief plan (CARES Act) signed by the President on Friday will bring some much needed support, the future is far from clear.

So what has this all been about? Why has JP Morgan taken us on this mystical time travel journey? What can we learn from these other crashes?

Well, we think there are three key takeaways (feel free to add your own).

Takeaway #1 – Stocks can fall a lot more. All three of these other crashes saw much greater losses before the bottom. So it’s a mistake to simply assume this one is over. It might be, but there’s no way to know (no matter what you read in the press).

Takeaway #2 – It’s impossible to time the market. Not only did stocks fall more, there were a lot of ups and downs along the way. And markets have a tendency of hitting bottom and bouncing back before you even know it. So trying to time the market is virtually impossible, likely to lose you money, and unnecessarily stressful. Invest for the long term and stick to your guns.

Takeaway #3 – We WILL recover. All three of these past events were bad. But things eventually got better, even after the Great Depression. Times were tough, but people found a way through them. And this time will be no different.

And the fourth takeaway (we lied about just three) is that money isn’t everything.

Yes, money is important, and the economy matters because people need jobs to pay the bills and survive and all that. But we need to remember we are humans too. So take a minute, take a breath, appreciate what life has given us (even the bad things) and remember that life will go on. So until next time, be thoughtful and be safe.

And of course you can always sign up and take our automated financial assessment and education course if you haven’t already. It’s free and a lot of fun!

► Discover if “stocks are cheap now”

► See what the government is doing to save our economy 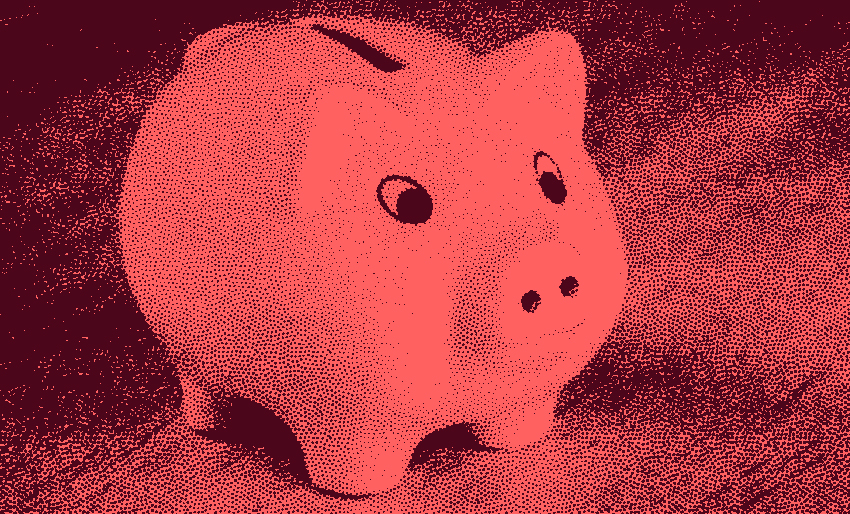 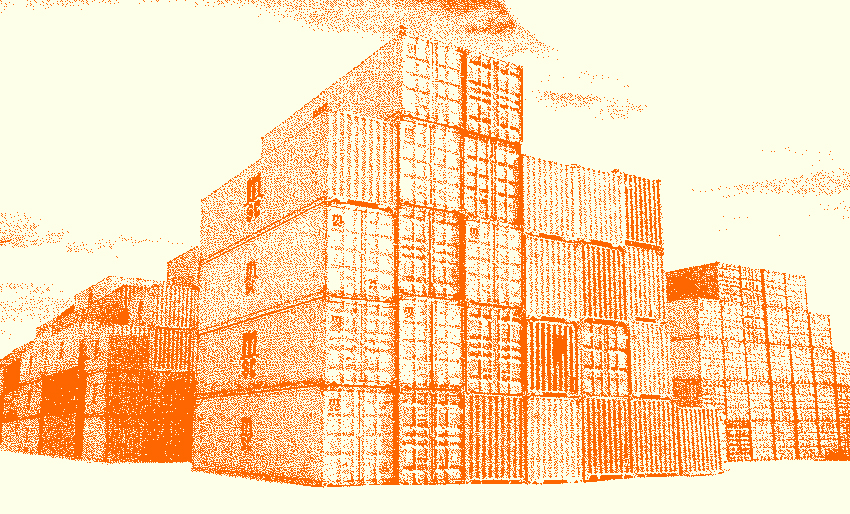